Frozen Fragile is a collaboration between Guy Jackson and Laura James

This emotional track features the magical voice of Laura James with Guy on piano, keyboard textures and production duties.

The track originated from Guy’s work as composer for the computer game Sea of Solitude.

They are joined by Tom Pickles on cello.

The cover art was created by Laura. 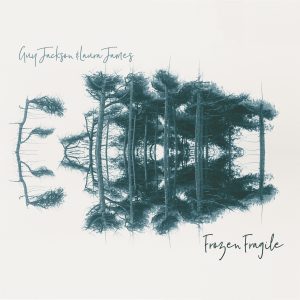 Laura James is a Cumbrian-born singer-songwriter, based in North London. After two heart-felt teenage folk/pop DIY album releases at the age of 15 & 17, Laura finally released her debut EP ‘The Bed of The Brook’ in 2011 with with her band The Lyres. The release was accompanied by a travelling trailer stage which graced the streets of Durham, Newcastle, Carlisle & Clitheroe.

Laura spent the next few years based in Liverpool. Playing all around the north-west of England. Laura James & The Lyres appeared at local & national Festivals including Liverpool Sound City, Great Escape Festival, Radio 1’s Big Weekend (Carlisle), Kendal Calling, A Carefully Planned Festival, Solfest and Ireby as well as international festivals such as DBMC in Delaware.

Laura’s first single ‘The Water’ was self-released in 2013 and has had extensive radio play including by Bob Harris on BBC Radio 2, as well as BBC Radio Cumbria, BBC Radio Lancashire and BBC Radio Merseyside it was also picked up by BBC 6 Music’s Tom Robinson.